The past weekend I played UIUCTF 2022 with Shellphish. I mainly focused on SMM Cowsay 1 and 2, under the close supervision of the Intel machine Paul Grosen. We were able to solve both challenges, and actually to first blood both of them!

Just in case it wasn’t clear from the title, these challenges are both about System Management Mode. SMM has recently been under spotlight after folks at Binarly.io and SentinelOne found vulnerabilities in many OEM firmware drivers. I will not go too much into the details of SMM, but please check out OST2 Architecture 4001, since it has an entire chapter dedicated to SMM — kudos to Xeno Kovah for this amazing resource.

For the sake of this writeup, it’s just important to know that SMM is an operating mode of Intel processors. It is used for different firmware-level stuff, from advanced-power management to device emulation. The transition from any CPU mode to SMM happens when a System Management Interrupt (SMI) is delivered to the CPU: 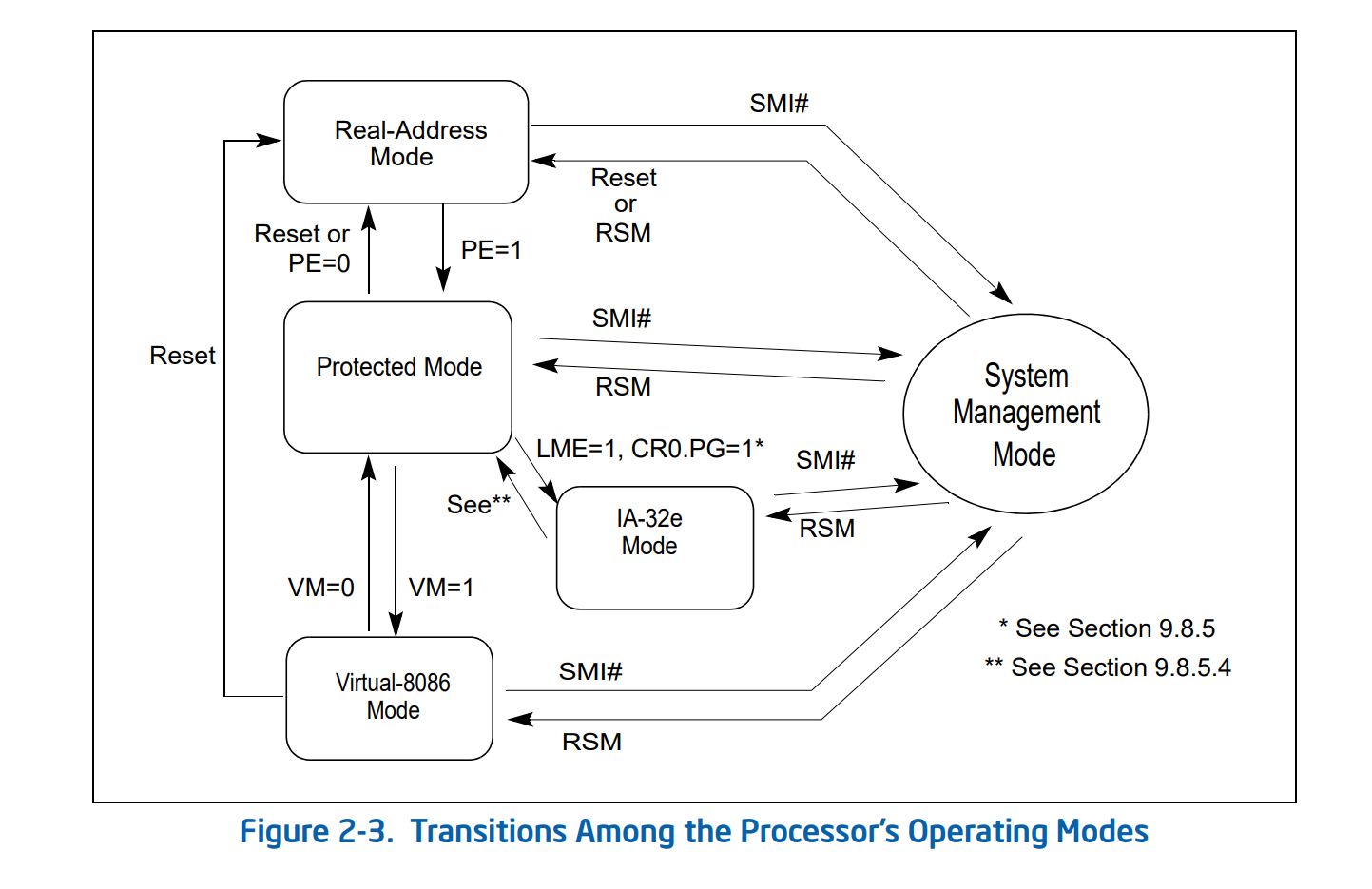 This transition involves a process similar to a context-switch. When the CPU enters SMM it saves its state (registers) in the System Management RAM (SMRAM). The hardware then jumps to the SMI handler and, once the handler has completed its task, it executes the rsm instruction to re-load the state saved in SMRAM and it gives back control to the OS.

The good news is that most of this process is transparent, thanks to the UEFI firmware development environment TianoCore EDK II. I am not an UEFI expert, but to solve this challenge is enough to know that SMI Handlers register themselves during boot. Each SMI handler is identified by a given GUID, and to interact with them from non-SMM code we only need pass this GUID to some EDK II functions. The framework takes care of making our parameter accessible from SMM, but also of entering SMM and dispatching the execution to the correct SMI handler.

The most important files in the handout are the following:

After running the challenge, we are asked to insert some shellcode which are promised it will be executed, as you can see in the following output:

After a quick review of the patches folder, we confirm that the challenge “entrypoint” is the Binexec driver. As shown below, this driver passes a pointer to the “Welcome to…” string to the Cowsay function. This function fills the EFI_SMM_COMMUNICATE_HEADER object with three values: the GUID of the cowsay SMM driver (stored in the field HeaderGuid), the pointer to the string (Data), and the size of the message (MessageLength). It then passes this object to the Communicate function, which will eventually take care of entering SMM and jumping to the correct SMI handler.

The “correct” SMI handler is shown below. As you can see, the function SmmCowsayHandler accepts CommBuffer and CommBufferSize as parameters; these correspond to the Data and MessageLength of the EFI_SMM_COMMUNICATE_HEADER object. This handler, after a couple of checks, passes the pointer stored at the beginning of CommBuffer to the Cowsay SMM function, which is the function that finally prints the message.

The road to solution for this challenge should be finally clear: let’s just ask SmmCowsayHandler to print the flag (stored at address 0x44440000)! At this point however you might be asking yourself: why do we need to mess with all this SMM thing? Since the challenge executes our shellcode.. can’t we just go and read the flag? After looking at the provided QEMU patches we have to turn down this idea, because the flag is stored in a MMIO device that returns the correct string only when the memory read operation is issued from SMM.

The fastest possible way to solve this challenge would be to directly call the Cowsay function of the Binexec driver, and passing the address of the flag as a parameter. Unfortunately for us, the compiler inlined this function call. However, we can still use the code around address 0x173B of the Binexec.debug file as a reference. In short, the final shellcode does the following:

Compile with the following:

The above shellcode will get you every other byte of the flag (uut{hnrn_eoi_nufcet3201}), since the message is a CHAR16 string but the flag is a “normal” CHAR8 string. Just change the address to 0x44440000 to leak the chars at odd positions (icfwe_igzr_sisfiin_55e8) and zip them to get the flag for SMM Cowsay 1: uiuctf{when_ring_zero_is_insufficient_35250e18}.

The non-SMM part of this second part is pretty much as before, except this time we pass to the SMM handler the actual message to print, not a pointer to it.

Upon a closer look at the SmmCopyMemToSmram call, we quickly realized that here is where the vulnerability is, since CommBuffer and CommBufferSize are under our control. This means that by supplying a large enough string we can write past the Message field.. and what’s after this field? A function pointer!

Before we delve in our exploitation strategy, I want to spend some time to discuss how to setup a proper debugging environment. QEMU has the flag -s -S and gdb has target remote, but where should we put a breakpoint to debug SMM code? Fortunately for us, the SMM handler above contains a breakpoint functionality (icebp). If we craft a message that contains a non-zero value at offset 408, the SMI handler will execute this breakpoint. After sending this message, GDB will trap in SMM (you can double check this by searching for “SMM=1” in the output of “info register” in the QEMU Monitor):

As a side node, QEMU does not support this instruction by default, so I had to recompile it: after downloading the QEMU sources, I grepped for “WANT_ICEBP”, removed the #ifdef and rebuilt QEMU.

Finally, since this will likely turn into ROPping our way to the flag, I wrote this simple GDB script to dump all the mapped pages and find the address of any ROP gadget we will need.

After crafting a message that is 408 bytes long, I put a breakpoint at the mDebugData.CowsayFunc callsite (address 0x7ee92c5) to inspect the program state. Since UEFI uses the Microsoft calling convention, rcx will contain a pointer to CommBuffer, while rdx is CommBufferSize.

In short, we used the following exploit strategy to solve the challenge:

With the help of Ropper and ropr we find all the gadgets we need to perform these 4 steps, except the stack pivoting one that was found manually by Paul (probably after staring for just 5 minutes at the output of xxd SmmCowsay.efi).

Overall, the following are the highlights of the final exploit:

As with SMM Cowsay 1, don’t forget to leak the odd indexes of the flag, and zip the two parts to get the final flag uiuctf{dont_try_this_at_home_I_mean_at_work_5dfbf3eb}.

What a fun challenges. I really like challenges divided in multiple steps, were you keep refining some knowledge about a system to solve increasingly difficult problems. Finally, these systems challenges are definitely my favorite… I always end up going down several rabbit holes that make me learn about interesting low-level concepts.

Thanks to YiFei Zhu for these great challenges!